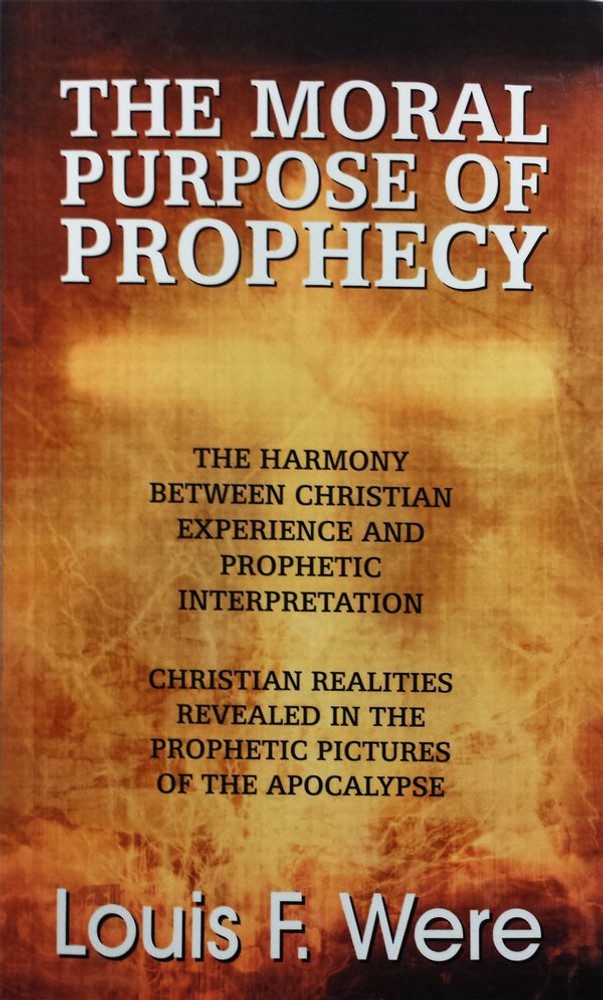 113 pages The harmony between Christian experience and prophetic interpretation. Christian Realities revealed in the prophetic pictures of the apocalypse. Chapters:

Futurism is the most popular school of interpretation for the book of Revelation.  Its roots go back to the Jesuit scholar Francisco Ribera, but has recently been popularized through the Left Behind novels of Timothy LaHaye and Jerry B. Jenkins. Publishing several books and pamphlets on biblical prophecy, Louis F. Were published a concise response to Futurism - The Moral Purpose of Prophecy.

In this book, Were demonstrates, through numerous examples, how the New Testament draws spiritual significance from Old Testament imagery. To use biblical prophecy simply to forecast secular battles while neglecting the spiritual conflict behind human history undermines the moral focus of prophecy.

As Revelation 1:1 indicates, God employed "signs, "or symbols," to present events impacting the church.  "...so important are the truths the Lord presents in the Apocalypse," wrote Were, "that he throws living, symbolic pictures on the screen of prophecy to arrest and grip the attention." The biggest deficiency of Futurism is its neglect of the moral relevance of prophecy through literalism that is unlike the interpretation of Old Testament prophecies in the Gospels and the writings of Paul. Were lamented: "Attempts to apply literally dramatic symbolical representations spoil the picture the inspired word-artist has painted and create absurdities, which not only hide the truth portrayed by the symbol, but which at times lead to superstition and error." "Old Testament prophecies concerning the Lord reigning in Zion, and the victory of His people, are not to be understood as being separate from the story of salvation from sin, for salvation from sin is the moral purpose for which they were written."