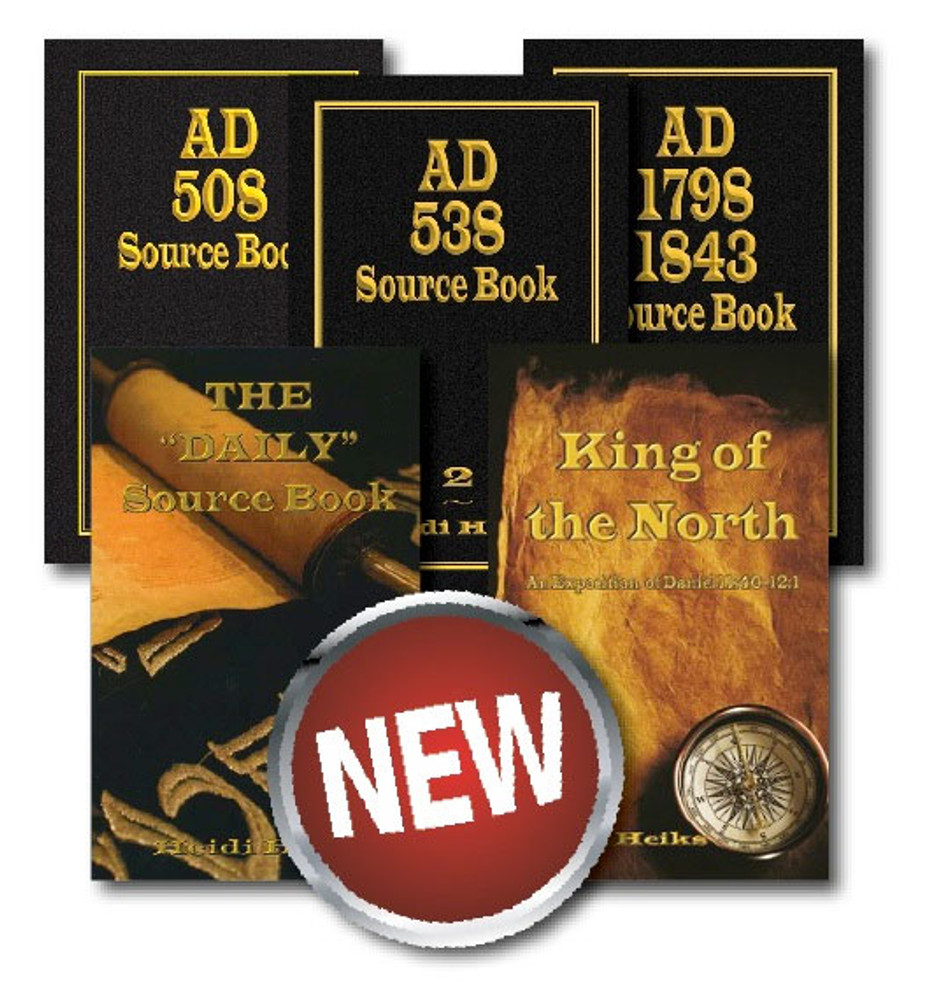 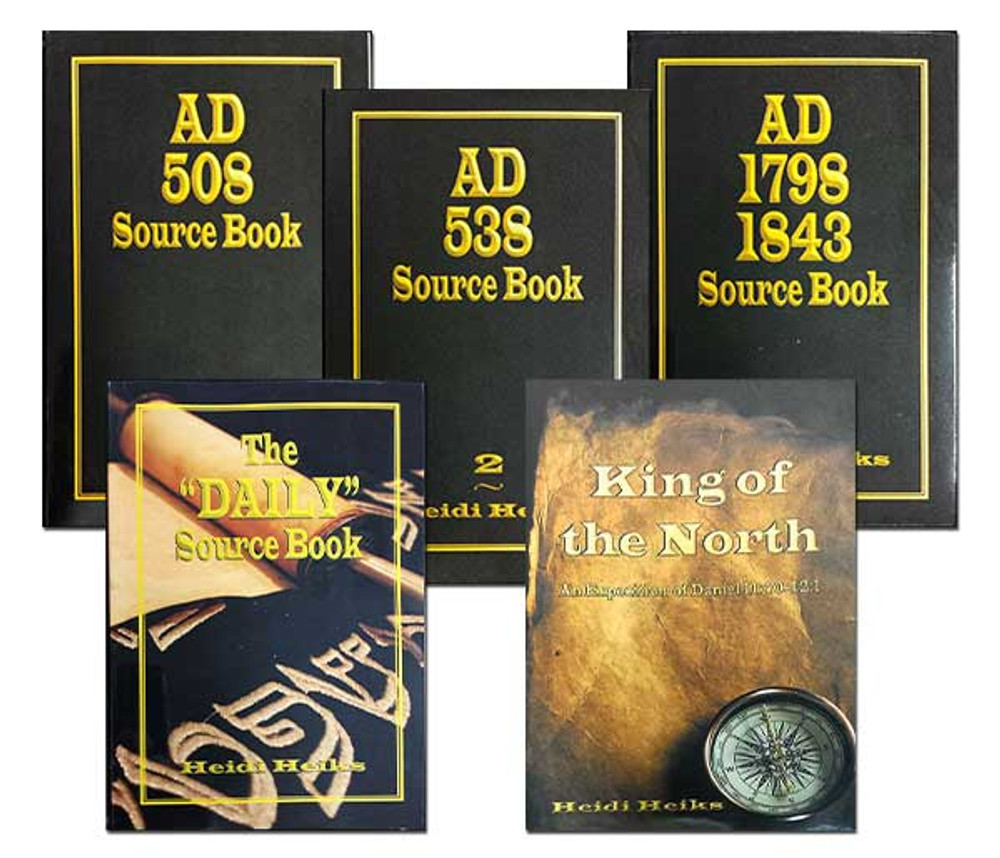 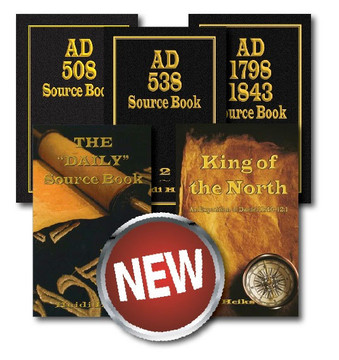 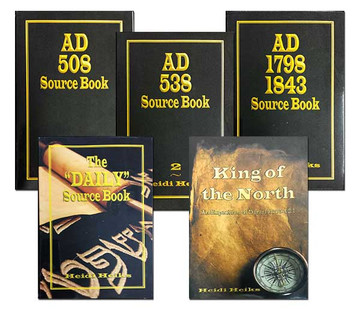 Get a slight price reduction when you purchase all 5 books by Heidi Heiks. Individual books are also available.

Summary of each book is below:

Brother Heiks has spent many years of research studying the primary documents of church and political history. We appreciate the fine work that Brother Heiks has done in collecting and analyzing much of this obscure material. Students of political, religious and prophetic history are in his debt for this very useful work.—William H. Shea, MD, Ph.D., Former Professor: Old Testament Department Seminary, Andrews University; Former Associate: Biblical Research Institute, General Conference of Seventh-day Adventists. AD 538

"The year A.D. 538 was a landmark year for the beginning of the fulfillment of an important time prophecy that spans the Middle Ages. It is essential, therefore, that those who follow the historicist method of interpreting prophecy establish this fixed point as firmly as possible. Brother Heiks has done precisely that with this present study of the important events that occurred and documents what were developed that year. His related studies of A.D. 508 and A.D. 1798 are also recommended to complete this trilogy of important historical-prophetic studies," said William H. Shea, MD, Ph.D.

"The events of the year 1798 and what followed immediately afterward are of great interest to students of history and prophecy. In this collection of primary and secondary documents compiled shortly thereafter, Brother Heiks has filled out the events surrounding the captivity of Pope Pius VI and the setting up of the Roman Republic through the eyes of those who participated in those events at the time. One can follow this course of events in intimate detail through the witness of those who favored such a change and those who did not. All of this makes the importance of those events much more clear and Brother Heiks is to be congratulated for bringing together these remarkable sources that provide so much detail in their witness," said William H. Shea, MD, Ph.D.

Within the pages of this book, you will obtain knowledge about the sanctuary and the work of the priest on earth and the work in heaven that Jesus, our High Priest, is fulfilling.

William H. Shea, Ph.D. provides the following insight about this book: In the Hebrew of the Old Testament the word tamid is used as an adverb, which modifies a verbal motion, to point out that the action goes on regularly, consistently or continually—'daily' at regular, repeated intervals. It is never used of an object or action in the most holy place, where the priest ministered only once a year. Nor is it ever used of pagan worship or the use of idols. It is used almost thirty times in connection with the tabernacle in the wilderness and the temple of Jerusalem—always referring to some action the priest carried out in its courtyard or in the holy place. "The question, then, is what single word or phrase can encompass all of these regular priestly activities in both areas? The "daily," which was followed once a year by the 'yearly' or 'annual' ministration in the Most Holy Place. Since these earthly functions were a typological model of what takes place in the heavenly sanctuary, its connection there shows that it belongs to the heavenly mediation and intercession of Christ on behalf of his earthly children.

King of the North

There are two schools of thought on the interpretation of Daniel 11, especially the closing verses which are seen as still to be fulfilled in the future. The first may be called the literal historical view in which the kings of the north and south are seen as literal geo-political entities in the present day Middle East. Adventist interpreters favored this view until the end of World War I when the British and the Turks fought a battle at Megiddo (Armageddon), but Christ did not come after it.

This failure led to the development of the second view, what may be called the spiritual or symbolic interpretation.By the end of World War II most Adventist interpreters had adopted this view. In this case the king of the south no longer refers to Egypt but it is seen as a symbol for an end time spiritual or political power. Likewise the king of the north is no longer Syria, but an alternate opposing spiritual or political power. In this school of thought search is made for a fitting application for these symbols and several possibilities need to be considered. Brother Heiks stands squarely within the parameters of the symbolic approach and he has given careful and detailed consideration to the possibilities that need to be examined in carrying out his search for the correct application of these symbols.

Brother Heiks has spent many years of research studying the primary documents of church and political history. We appreciate the fine work that Brother Heiks has done in collecting and analyzing much of this obscure material. Students of political, religious and prophetic history are in his debt for this very useful work.  William H. Shea, MD, Ph.D.Anyone familiar with historical research will be gratified with the author's care and devotion to unvarnished facts and his articulateness in translating from the original languages. Perhaps someone somewhere will take issue with some aspect of this research. But if so, he would have to demolish the brick-by-brick structure that the author has constructed—and that seems to be an unlikely achievement.  Herbert Edgar Douglass, Th.D.The three volumes by Heidi Heiks contain not only a large amount of primary source material illustrating how the prophecies of Daniel and Revelation were fulfilled in history, they also provide important background information. Heiks has put together an impressive array of historical material.  Gerhard Pfandl Ph.D., Associate Director: Biblical Research Institute, General Conference of Seventh-day Adventists.